For the producers, manually inserting 18 brass female connectors into a plastic frame for a control unit was a laborious and costly process. Ultrasonic welding offered an efficient alternative which considerably shortened the cycle times and was also financially worthwhile – in spite of a lower unit count. The versatility of the sonotrode and HERRMANN ENGINEERING played a crucial role here.

With production times of more than three minutes per component, fitting a plastic frame used to be a time-consuming task for apra-plast Kunststoffgehäuse-Systeme GmbH. The reason behind the long cycle times was the total of 18 brass female connectors which had to be inserted into the frame individually using heat. An automated process was not worthwhile due to the low number of units. The alternative process of molding the female connectors was also ruled out because of the high associated costs.

In one of the regular exchanges with apra-plast, Herrmann Ultraschall GmbH & Co KG learned about the challenge and presented an idea for a more efficient process. In our collaboration, we were able to develop a special ultrasonic welding solution. The result: The production times for the component were significantly shortened and the efficiency of the entire process increased.

Five times as fast thanks to the special blade sonotrode

The joining task consisted of inserting several brass female connectors into the polycarbonate frame simultaneously using ultrasonics. To do this, we first developed a special sonotrode which can insert all female connectors simultaneously and precisely for each side of the frame. We were able to reduce 18 stages which were previously required for the complete frame to just four stages, meaning that the cycle time was reduced to just under 40 seconds – this is a mere fifth of the original duration.

During the weld process, it is essential that the female connectors are completely and evenly inserted, as the frame for manufacturing the end product, a control unit, is screwed to a counterpart. Irregularities on the surface, such as those caused by protruding female connectors, could mean that both parts of the plastic housing cannot be connected together to create a seal later.

To ensure an even insertion of the female connectors, the component must be completely planar in the machine during the weld process, and we must be able to fix it in place so that no movement occurs. A special fixture with grooves was developed for this purpose. This allows the user to insert the component securely into the fixture, clamp it in place and weld the first side of the frame. The part is then turned and re-fastened and the second side of the frame is welded. All 18 female connectors are embedded in a total of four steps. During the project development process, in the end, it was the combination of the specially designed sonotrode and fixture which enabled a reliable ultrasonic weld process for the long frame with edges of 310 mm in length.

A machine for several applications

To reduce the amortization time of the ultrasonic welding machine, the Herrmann Engineering team suggested further possibilities for use from apra-plast's current projects. The quick-change system for the weld tools means that the ultrasonic welding machine can be re-tooled for a different application in just a few minutes. A further project was implemented in conjunction with the frame, and this was also produced in small series.

This product is the plastic housing of a measuring instrument into which a Plexiglas (PMMA) inspection window is embedded. The pane was previously attached by hand, which entailed several disadvantages. The connection between the components must be watertight to guarantee the flawless function of the end product. However, when inserting these using adhesive, air bubbles would frequently be formed which jeopardized the tightness. As well as this, the components were able to slip out of place due to the manual attachment process, which meant that it wasn't just the tightness that suffered, but also the look of the end product.

Initial tests showed that the use of ultrasonics here could contribute to an increase in product quality. The inspection window is connected to the plastic housing via ultrasonic welding to create an absolutely tight seal. In turn, not using adhesive also ensures a visually impeccable result and creates an environmentally compatible connection completely without additives. Another crucial criterion for using ultrasonic welding technology was the possibility of process monitoring: By closely monitoring and validating every single weld process, the machine ensures a level of process reliability which had not been achieved before.

With the two developed solutions, apra-plast is working with ultrasonic welding technology for the first time. In-depth basic training on ultrasonic welding and consulting with regard to the financial and technical feasibility of the project were crucial to the decision. By hiring a machine, the customer was able to perform tests in-house under real production conditions, and familiarize themselves with the use of the technology in advance.

Trade Show
Fakuma
17. - 21. October 2023
Friedrichshafen, Germany
Download date
more details
to top
Contact
Any questions?
We are here for you 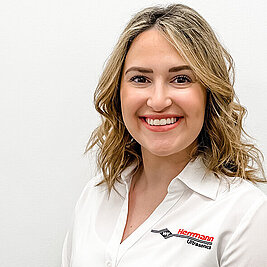 marketing​@herrmannultrasonics​.com
Any questions?
We are here for you